KFP rainwater harvesting that is permanent solution to water scarcity 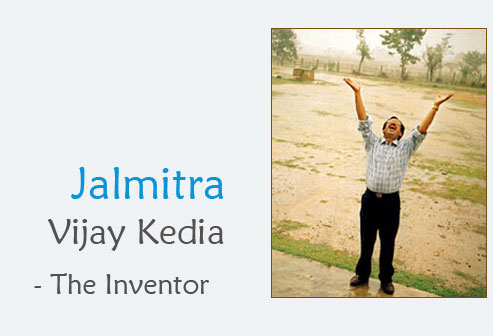 Jalmitra Mr. Vijay Kumar Kedia is a
Mechanical Engineer from BITS Pilani (1972-1977 Batch).
He built a flourishing Industrial Construction business.
But his heart was more in growing into the soil than building on it, he gave up his thriving business for agriculture.

In year 1990, VIjay Kedia started horticulture in 8 hectare farm near Aurangabad.
Water stood in front of him as a major challenge.
Within 6 years 12 bore-wells were dug for underground water in 8 hectare field, all failing one after another.
He failed to make his greens stand due to shortage of water.
In 1996, Mr. Kedia bought another land with existing Bandharas (check dams) of 25000 cu. mtr. water holding capacity. But in summer of 1998 he faced a severe water crisis as water in the check dams and wells dried.
He tried all existing Rianwater Harvesting methods but in vain.

Mr. Kedia took up the challenge and began experimenting.
He understood the need of plants, they do not take direct water but absorb it from soil moisture. He than began experimenting of harvesting rainwater underground in form of moisture.
And came up with an innovative soultion KFP - Kedia Farm Pattern.
KFP solved all the water problems and he didn't faced water scarcity since then.

This revolutionary RWH system - KFP is patented by Govt. of India.